Dr. T.C. Hardy can assist residents around or near Laporte Colorado who are looking for a specialist. Dr. Hardy is a board-certified Orthodontist Laporte who has devoted his career to assisting both kids and adults in straightening their teeth, correcting bite problems, and improving a variety of orthodontic problems. At Taft Hill Orthodontics, we provide a variety of treatment options to match your specific needs. Our treatments include traditional Laporte Braces, short-term braces, and other kinds of braces such as Lingual braces Laporte, as well as Laporte Invisalign aligners, Laporte Clear bracket braces, Invisalign Teen®, surgical orthodontics, and treatment for temporomandibular joint disorder (TMJ). Dr. Hardy and his highly qualified team utilize some of the most advanced techniques available to help you reach your teeth goals comfortably and discreetly.

Feel free to browse our site to know more about our practice and the services we provide. Below is a comprehensive map of our dental office’s location near Laporte, CO area. Contact Taft Hill Orthodontics if you have any questions or would like to book a consultation for an Orthodontist Laporte CO.

We believe that finding experienced and trustworthy care near Laporte, CO is an important factor of the orthodontic care procedure. While regular dentists may offer orthodontic services, you can visit our practice and be examined by a specialist, an actual Orthodontist Laporte, CO who has expertise in these type of procedures and has the knowledge and experience to deliver optimal results. Dr. Hardy received his specialization in Orthodontics from Tufts University School of Dental Medicine, where he concentrated on fixing misaligned teeth, occlusion adjustment, and treating jaw abnormalities. As an active member of the American Dental Association and the American Association of Orthodontists, Dr. Hardy and our entire team of Orthodontics Laporte professionals are dedicated to creating a relaxed, personalized experience for our patients. He also does not wish anyone to be restricted by financial constraints, and thus, works with each patient to make braces as affordable as possible. 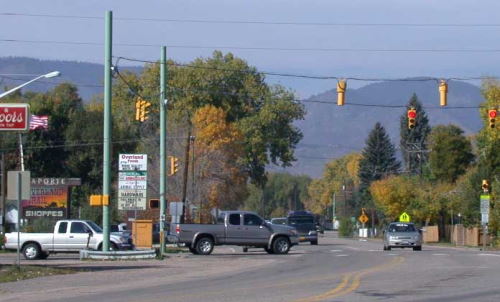 Image Source: La_Porte,_Colorado,_looking_westward.jpg from Creative Commons by Decumanus, CC BY-SA 3.0
Laporte (sometimes written La Porte) is an unincorporated community, a post office, and a census-designated place (CDP) in Larimer County, Colorado, United States. The CDP is part of the Metropolitan Statistical Area of Fort Collins, Colorado. The Laporte post office has ZIP Code 80535.[3] According to the 2010 United States Census, the Laporte CDP had a population of 2,450 people, while the 80535 ZIP Code Tabulation Area had a population of 2,636 people, encompassing nearby localities. With wagon trains and stagecoaches continually passing through, LaPorte quickly became a thriving commerce and supply center for emigrants. Four saloons, a brewery, a butcher shop, two blacksmith shops, a general store, and a hotel were among the establishments. The store was a booming success, with sales reaching $1,000 per day on occasion. The stage station, the county courthouse, the soldiers, Indians, and trappers were all located in LaPorte, which was the most important settlement north of Denver. The United States established Camp Collins in 1862. The army was stationed near the river to safeguard the stage line from Native American attacks. The Laporte Townsite Company claimed 1,280 acres (5.2 km2) of land for the town the same year. The 13th Kansas Volunteer Infantry was stationed in Laporte in 1863, operating as an escort for the Overland Stage on its way to Virginia Dale. The army camp was flooded during the 1864 flood, and the soldiers were forced to flee to higher ground. Col. Collins traveled down from Laramie, Wyoming, on an inspection tour in August of that year, and decided to move the army camp to Fort Collins, about 6 miles downriver (10 km). Laporte is a small town on the Cache la Poudre River, northwest of Fort Collins, near the point where the river emerges from the Rocky Mountain foothills. The community's northern border is bordered by US Route 287, which leads southeast 6 miles (10 kilometers) to Fort Collins and northwest 58 miles (93 kilometers) to Laramie, Wyoming. The Laporte CDP covers 3,983 acres (16.120 km2), with water covering 69 acres (0.279 km2). (Source: Wikipedia)